Another glowing review for StormAudio

Our StormAudio MK2 lines have had a fantastic year picking up awards and receiving marvelous reviews. Here is another one to add to the list from popular Japanese site, Stereo Sound On-Line.

Experience the finest and shocking surround sound that is well-controlled and balanced.

The ISP 3D.16 ELITE (HiVi Grand Prix 2018 / Bronze Award Winner) of StormAudio (France), has evolved into a second generation machine, and will land in Japan this fall. 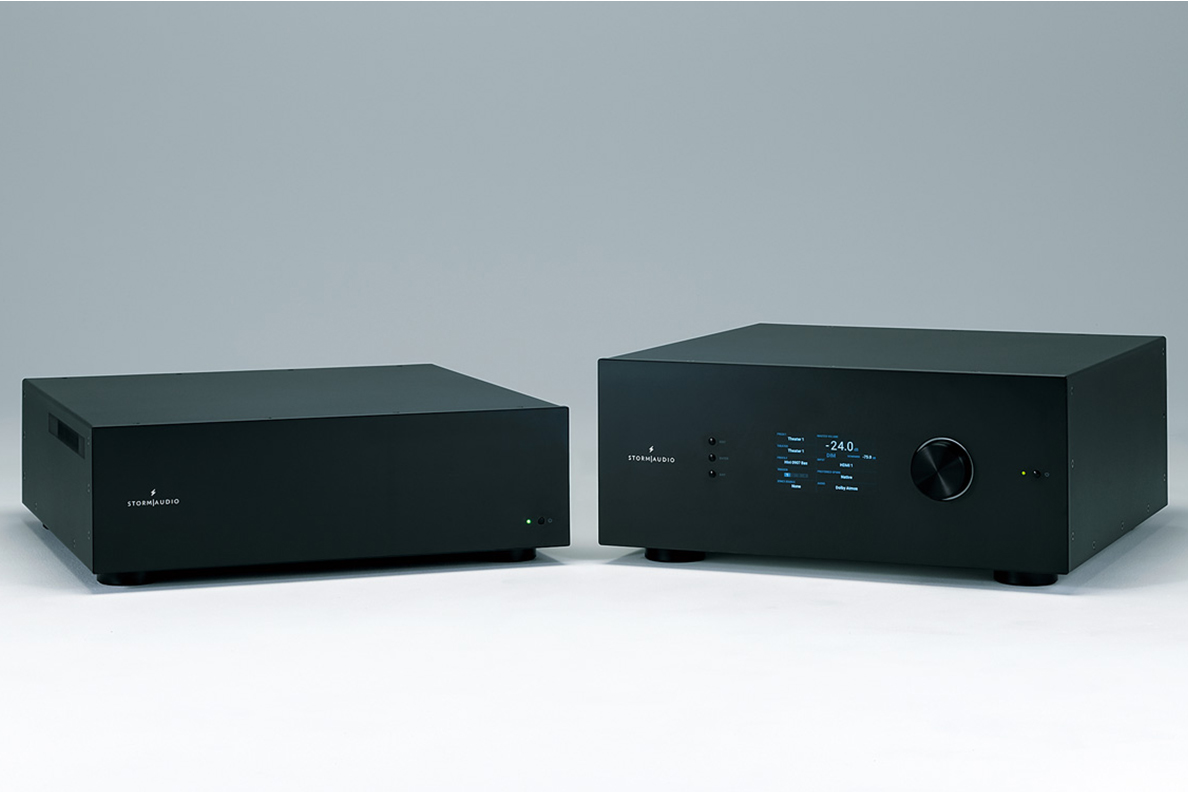 ● Update: there is an update from ISP 3D.16 ELITE. 24ch decoder update, HDMI board update

The ISP 3D.16 ELITE had a maximum number of 6 overhead speakers installed, but its successor ISP.16 ANALOG MK2 released this time can manage 8 of them, and its higher model ISP.24 ANALOG MK2 ( Below, ISP.24 MK2) can be configured up to 13.1.10 (10 overhead speakers) for signal processing (multiple subwoofers can be connected).

Here, we decided to combine the ISP.24 MK2 and the 16ch power amplifier PA.16 MK2 announced at the same time, and verify the performance in the HiVi viewing room where 9 overhead speakers are arranged in 3 rows. The PA.16 MK2 is a 200W (8Ω) / ch 16ch power amplifier that uses Pascal Audio's (Denmark) class D amplifier technology. For analog audio input, both ISP.24 MK2 and PA.16 MK2 are equipped with only XLR balanced terminals.

The immersive sound of both machines, obtained through rigorous measurement and careful adjustment with the cooperation from the staff of the importer, is the highest level in the history of the Hi Vi viewing room. First of all, let me confess that I was shocked by the great appeal of the sound.

The ISP.24 ANALOG MK2 is equipped with pre-output for 16 channels on the right side of the panel and 8 channels on the lower center of the housing. All are XLR balanced specifications. It has a slot structure for adding an HDMI terminal and an expansion board, and it is possible to add boards and functions as needed. Compared to the previous generation machine, the DSP for decoding and the volume configuration have evolved, the overall software has been refined, and high sound quality, multi-functionality, and ease of use have all been improved.

PA.16 MK2 houses a 16ch power amplifier boasting a rated output of 200W at 8Ω in a housing with a height of about 15cm. In addition to the 16ch balanced input terminal, a speaker terminal compatible with banana plug / Y lug terminal is available. As for the amplifier circuit, Storm Audio has customized the class D amplifier module manufactured by Pascal Audio of Denmark. It seems that there is no particular upgrade from the previous generation for the amplifier circuit, but the housing structure such as the panel material has been changed.

First, I would like to give an overview of the ISP.24 MK2. This unit will support Auro-3D / Dolby Atmos / DTS:X Pro, as well as IMAX Enhanced and DTS:X Pro decoding, which will be available as an update later this year. Regarding the difference from the first model, the DSP for decoding was first replaced with a new generation chip made by Texas Instruments with improved S / N. The volume has also been changed from the conventional digital type to a digital / analog hybrid type that can improve S / N at low volume.

In addition, the room acoustic correction technology "DiracLive" adopted by this unit has also become the latest version, and a new "Bass Control Add-On" function has been added. This is a technology that comprehensively manages the low-frequency delay / gain / phase of all channels, including the subwoofer, and allows comprehensive calibration for an optimum sound without obscuring the bass at the listening point. With the addition of this function, seamless and natural bass can be obtained even when multiple subwoofers are installed.

Furthermore, this unit can deploy 24 channels not only in the horizontal (surround) direction but also in the vertical direction. In other words, it is possible to drive a multi-amplifier for speakers with two or more ways using the built-in active crossover. This unit also has a network audio function and is compatible with the comprehensive music playback management software "Roon" (2ch / Stereo only). The operation of this unit is performed on the iPad on which the dedicated application "Storm Remote 4.0" is installed. The app has been changed to a simpler layout than before, giving the impression that it is much easier to see.

Enjoy the appeal of the latest movie sound: the birth of an astonishing processor !

First, measure with the latest version of "Dirac Live". The biggest sound quality appeal point of this room sound correction technology is that full-scale impulse response correction is possible. While moving the measurement microphone near the listening point, the test tone is radiated from all the speakers installed at least in 9 places, and the direct wave and the initial reflected sound are optimized in total.

In addition, regarding frequency correction, the target curve of the frequency characteristic that DiracLive uses as a reference is a gentle downward-sloping characteristic of +2 dB at 30Hz and –2 dB at 10kHz, with 400Hz as 0 dB. It's a curve that I can understand from experience, but of course this characteristic can be set flat. By the way, it is said that the importer or retailer will go to the user's house to perform this measurement when purchasing the equipment.

ISP.24 ANALOG MK2 requires a personal computer and iPad for basic settings and operations. In particular, the basic settings are to connect to the Internet via LAN, connect the separately sold microphone set "New Microphone Kit (provisional)", and then use the PC to set the IP address of ISP.24 ~ (address on the network). Connect to ISP.24 ~ from your PC browser using the numbers shown). After specifying / setting the basic speaker layout, etc., connect the measurement microphone to the PC with a USB cable and set the measurement operations that appear on the PC screen. Dirac Live 3, the latest method from Dirac, is used for room sound correction. The data picked up by the microphone is sent to StormAudio's server via the Internet, and the calculation result is fed back to the user's home. 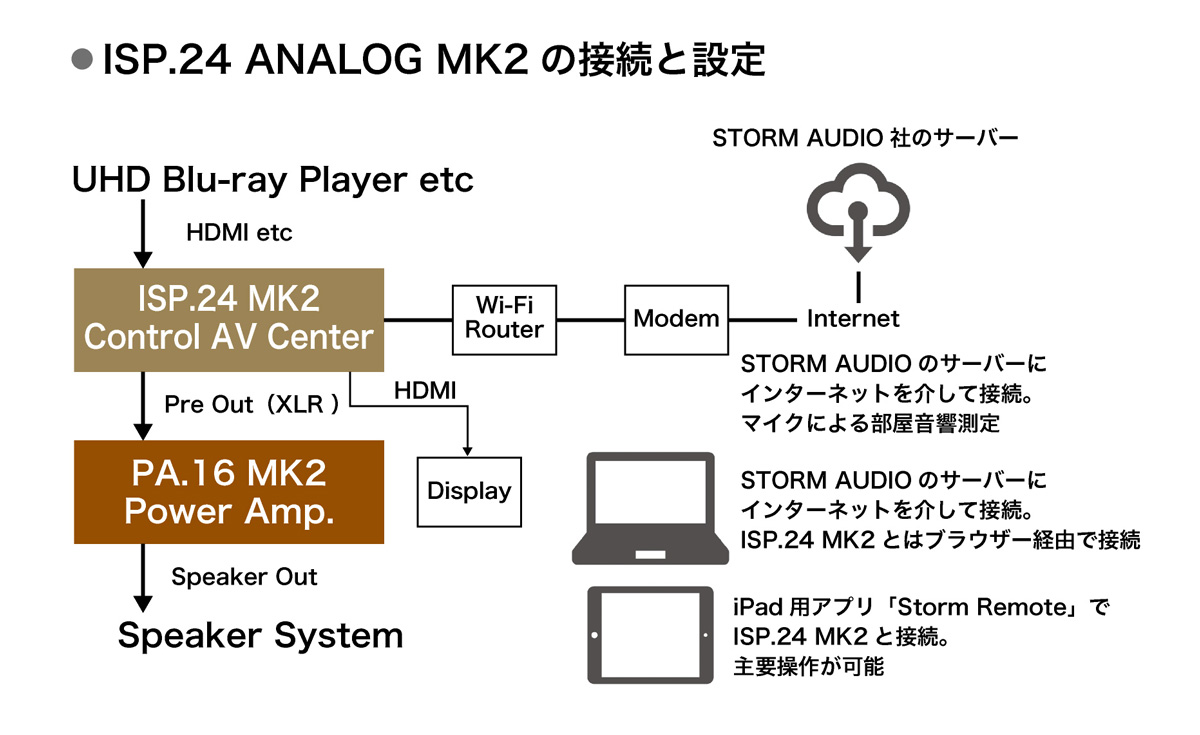 The test was conducted by configuring the floor channel with Platinum Series II of Monitor Audio which is the HiVi viewing room reference. The overhead speaker is the Eclipse TD508MK3 mounted on the ceiling. Two subwoofers, PLW215Ⅱ, were installed on both sides of the center speaker.

The channel allocation is as shown in the figure below. I started the test with a 7.1ch configuration with PLC350Ⅱ applied to the center speaker, but I couldn't get rid of the discomfort that the sound of the horizontal center speaker with a different radiation pattern did not blend with other channels, so I changed to a centerless 6.1ch configuration. With this change, a superb surround space where each channel was delivering a well-controlled and balance sound, and while playing various music and movie content, it brought great enjoyment to my senses. 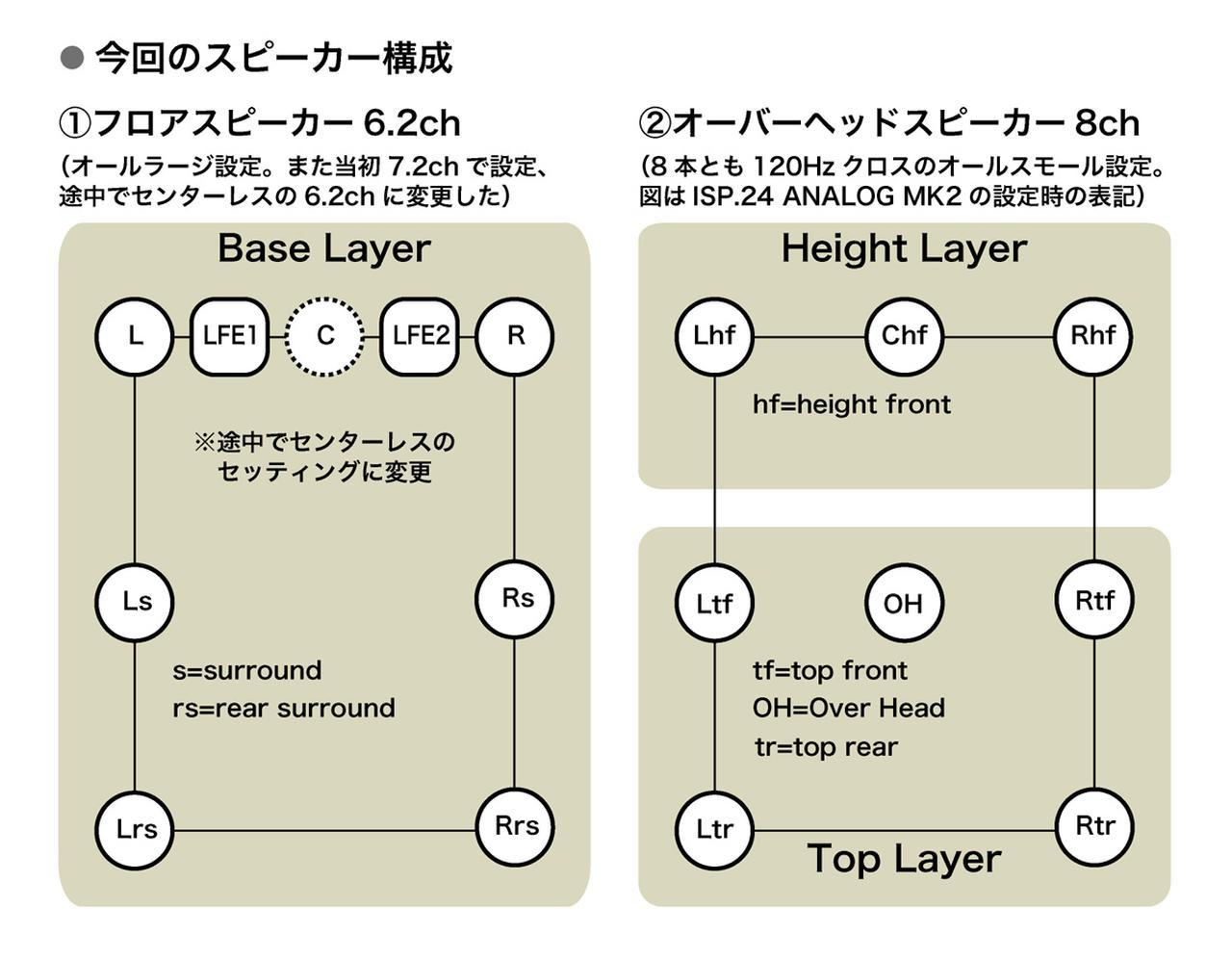 The test was conducted with a 7.2ch speaker set in the HiVi viewing room and 8 out of 9 overhead speakers installed on the ceiling. In ISP.24 ANALOG MK2, various patterns are preset, but this time, "Base Layer" (floor speaker) is 7.2ch, "Height Layer" is 3 in front of the ceiling, and the "Top Layer" where a total of eight speakers were assigned, three in the center of the ceiling and two in the rear. In addition, the center speaker on the floor was reset to the state of 6.2ch that was removed in the middle, and the measurement was restarted. 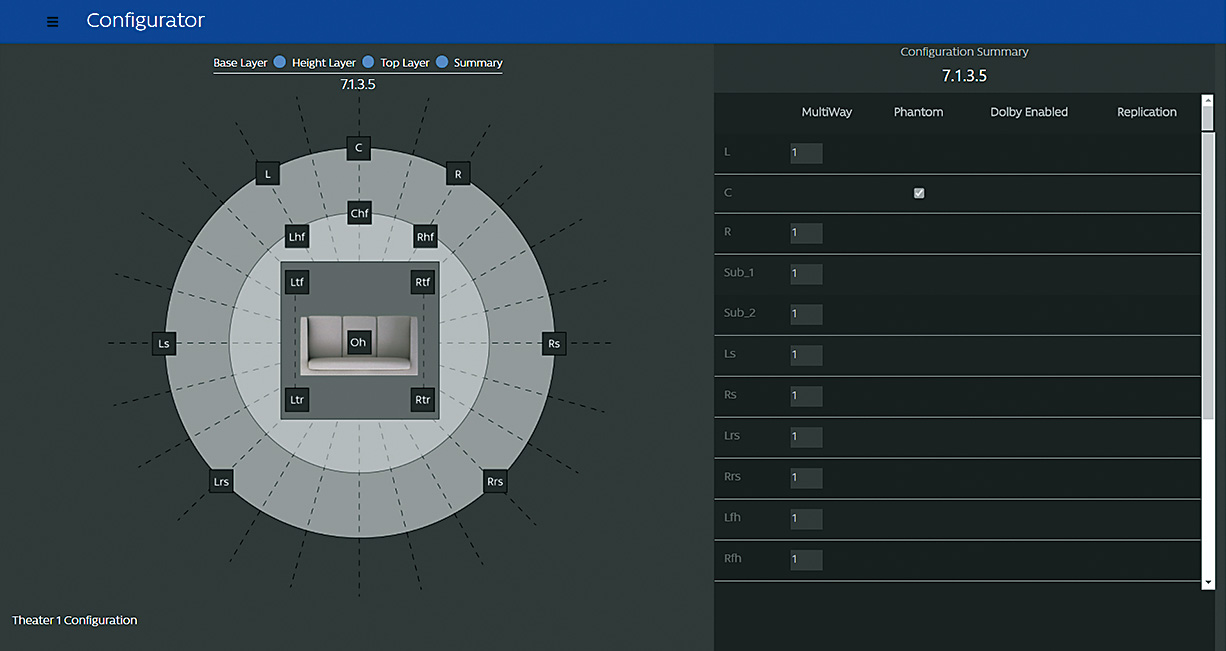 It is necessary to perform the measurement at 9 points when the viewing position is set to the single position. Since the configuration was 7.2.8 this time, 17 signal sounds were collected 9 times each, and a total of 153 sounds were collected, and the measurement time took about 15 minutes. If the viewing position is widened, the number of measurements will increase, and in some cases the maximum number will be 17. The measurement will be performed by the import agency or the dealer at the time of initial installation, but if the user himself / herself carries out the measurement, it is necessary to purchase a dedicated microphone set. 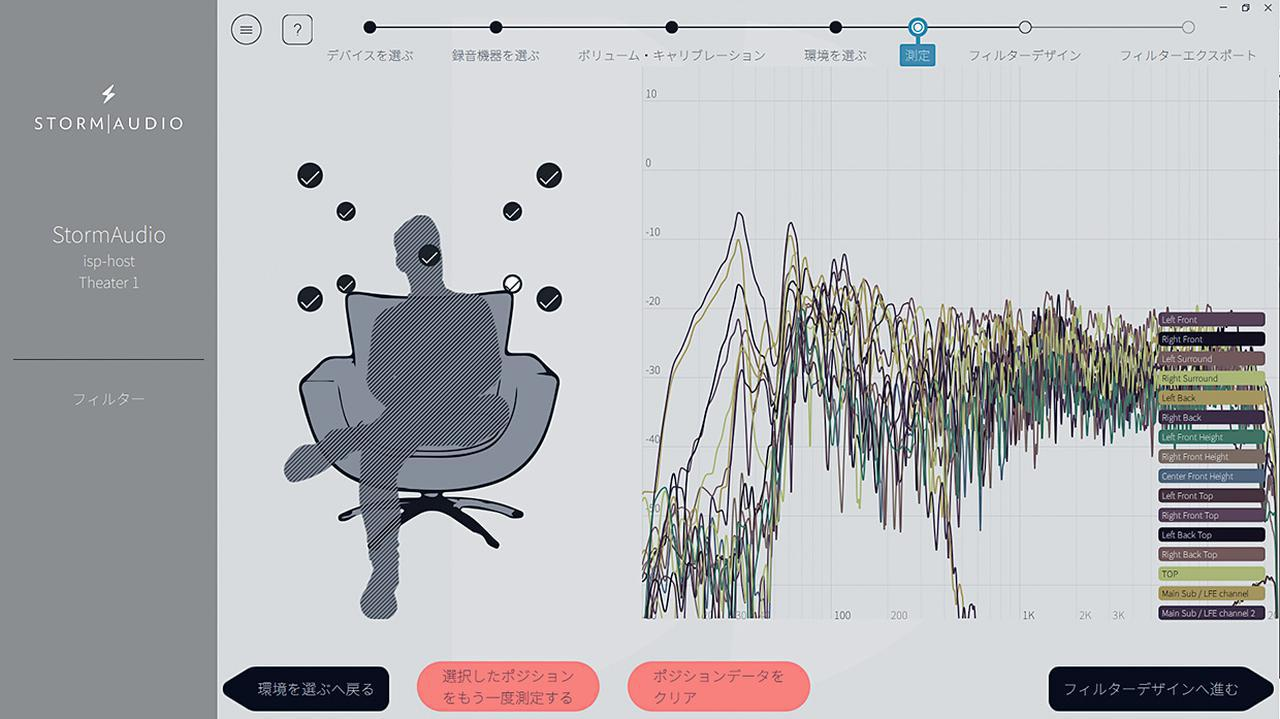 The screen of the measurement result. The photo shows the correction result of the front L speaker. The target curve is a curve defined by StormAudio and it is in a state where the high range is dropped while raising the low range a little. The curve can be completely flat, etc. 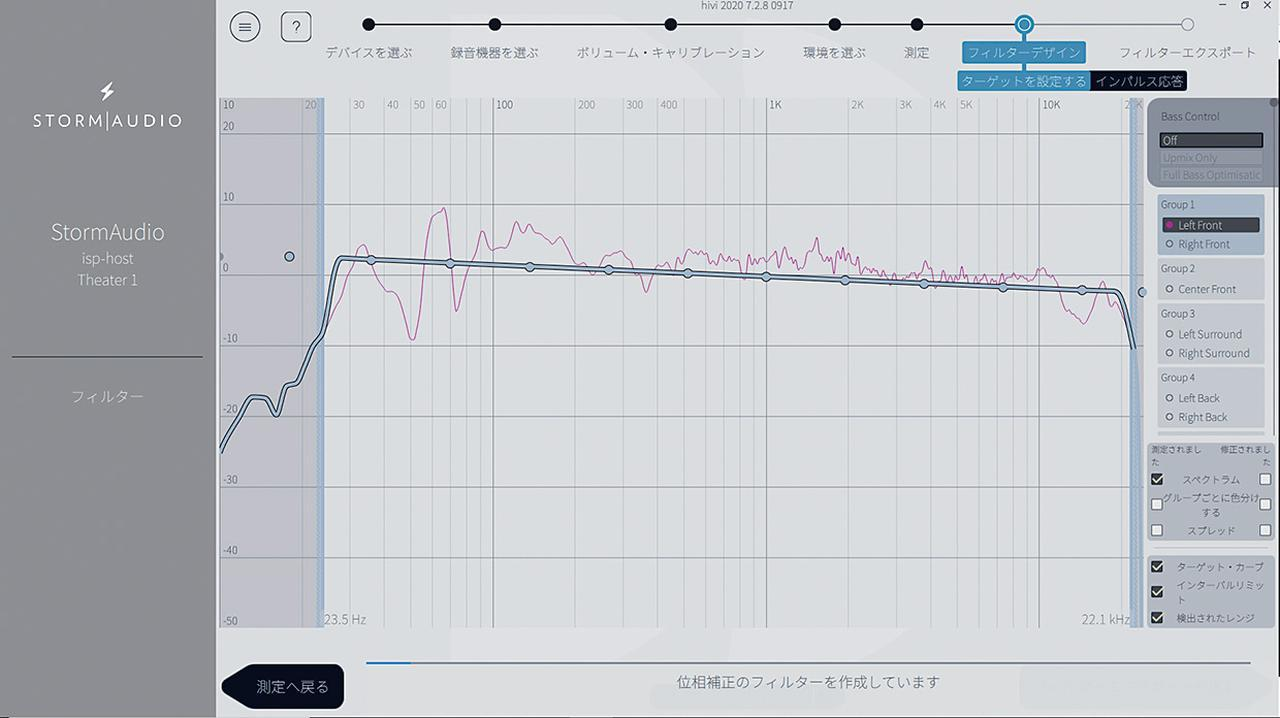 By the way, the ceiling speakers that are driven during this viewing are as shown in the figure below. Auro-3D and the company's proposed upmix mode AuroMatic playback is set to 6, and other (Dolby Atmos, etc.) is set to drive 4.

StormAudio sets the speakers used based on the speaker layout for each format. This time, of the 9 speakers placed on the ceiling of the HiVi viewing room (based on the 22.2ch layout for broadcasting), 8 are connected at the same time, so Dolby Atmos, DTS:X Pro, Auro-3D play over different speakers. The figure on the left shows four ceiling speakers that sound when playing Dolby Atmos audio, and the figure on the right shows five ceiling speakers that sound when playing Auro-3D. The relationship between the audio signal and the playback speaker changes depending on the speaker settings and the preset layout. 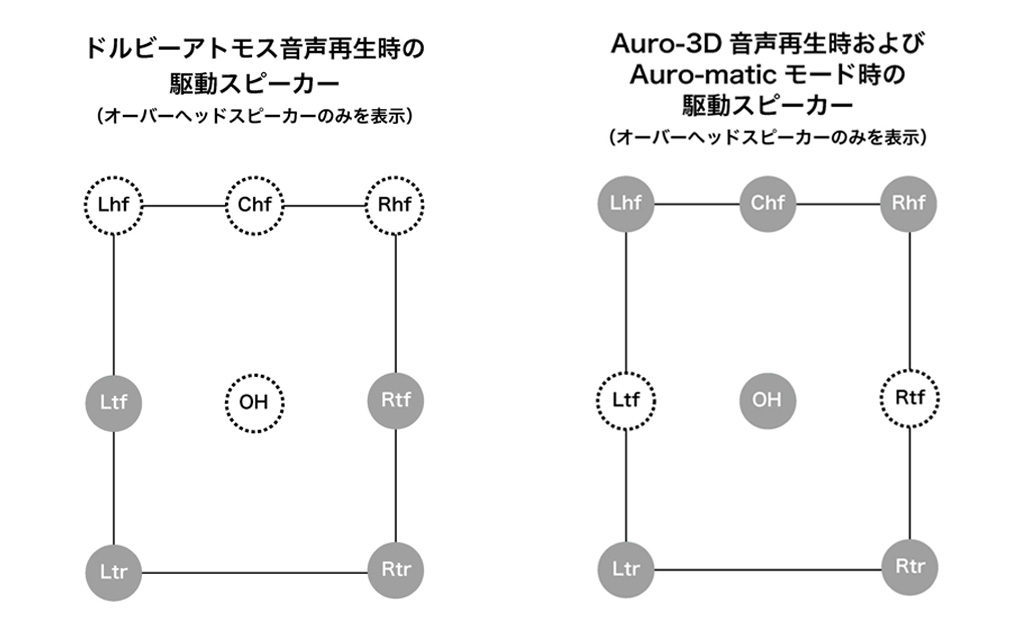 First, I tried turning on / off the Bass Control Add-On function on the Auro-3D demo disc, but it was overwhelmingly good. As the word says, the turbidity of the low frequencies disappears, and a clear and clear sound field space appears. I saw the launch of fireworks from the UHD Blu-ray "Remember Me" mixed in Dolby Atmos, but the explosive sound was so intense! The low-frequency signals radiated from the two PLW215Ⅱs stop without unnecessarily trailing. I was amazed at the power of this subwoofer as well as the wonder of the Bass Control Add-On function.

The use of multiple subwoofers when playing movie content is not always successful from past experience (the shape and size of the room may increase the turbidity, or the two basses cancel each other out to create a compromised bass sound. I was looking at the previous issue of this magazine with the feeling that I would like to advise from the old woman that it should be recommended so easily, but I am convinced that using the Bass Control Add-On function will definitely work.

I also tried playing UHD Blu-ray "1917", "Apocalypse Now Final Cut", "Ford vs Ferrari", etc. mixed in Dolby Atmos. The clarity of the dialogue, the response and precision of the sound effects and the dynamic extension of music is perfect for listening. I enjoyed the appeal of the latest movie sound as if I were transported to Hollywood's top-class dubbing theater.

The race scene at Le Mans, the climax of "Ford vs Ferrari". The exhaust notes of the Ford GT40, which snarls and runs through, at around 7000 rpm, are like gorgeous music. No matter how loud you turn it up, it's not too noisy. I spent hours listening and thinking to myself that a shockingly sublime surround processor has arrived. The improvement in sound quality from the previous model far exceeded my expectations. I definitely want to test it at home.